As a background to the upcoming election, the National Election Board of Ethiopia (NEBE) has announced a revised version of the allocation of parliamentary seats to regional states.  Details of this announcement was reported in today’s issue of the Reporter News Paper.

In the past, I have made repeated pleas to the authorities to use evidence-based decision making, including allocations of parliamentary seats. In this piece I will go a step further and present some facts which the authorities may take them into account. Alternatively, if they have made any efforts base their decisions on facts, then they should offer some explanations how exactly they undertake allocations of the parliamentary seats.

General elections are supposed to be preceded by population censuses.  For whatever reason, if conducting population census is not feasible, then the only logical step to follow would be to use the previous census. In Ethiopia’s case, there is no escaping from relying on the census of 2007, not matter how outdated that figure might sound.  No arbitrary projection of some sort would be acceptable for things of paramount importance such as the general election. 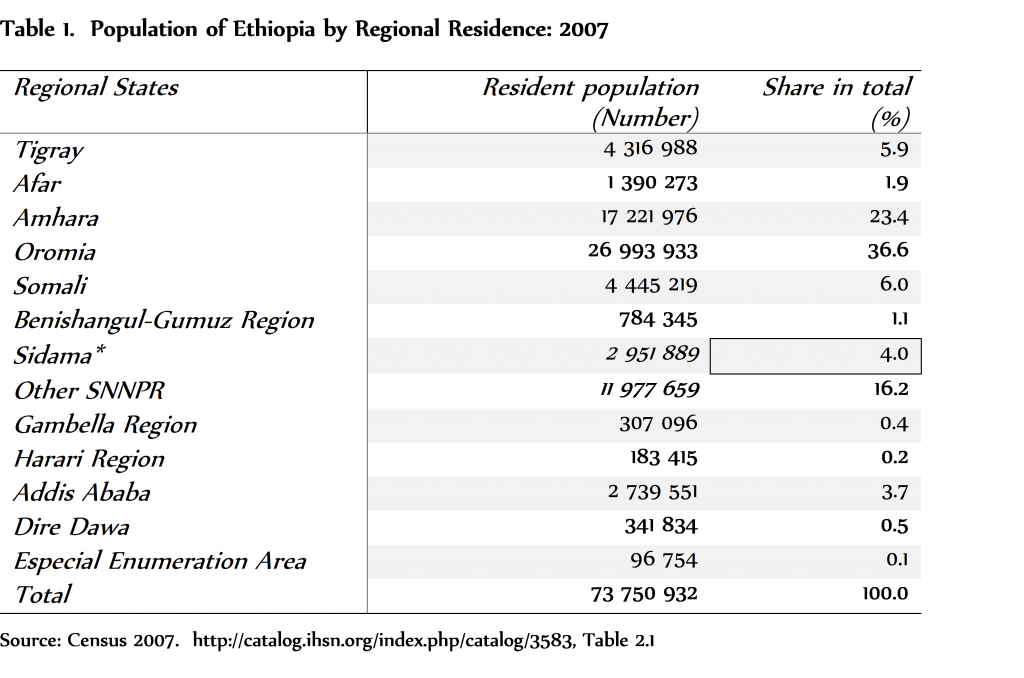 In this piece, I am primarily interested in establishing links between shares in parliamentary seats and shares in total population.  In other words, resident population share is the most tangible and sensible evidence base on which parliamentary seat allocations should be based.  I will substantiate this argument further below, but it would prove useful to discuss regional population share by ethnicity or language groups.

While Table 1 presents regional population share by residence (regardless of what language the resident persons speak), Table 2 presents population share by ethnicity or language group (regardless of which region the person is resident). Afaan Oromo speaking population constituted 34.4% of total population of Ethiopia.  This is the sum of ethnically Oromo people resident in Oromia and those resident in other regions.  Similarly, Ethnically Amhara people constituted 27% of Ethiopia’s population, here again, this share includes ethnic Amharas resident in Amhara region as well as those who reside in the other regional states.

We pull together facts discussed so far and present in Table 3.  The regional states are listed in the first table, as in Table 1.  The second column, labelled column A, presents parliamentary seats if the allocation were undertaken fairly based on regional shares in resident population. The table is sorted in descending order of figures under fair allocation, column A.

If fair allocation was implemented, then Oromia would come on top with 200 seats in the parliament.  This would have been followed by Amhara, SNNPR, Somali, Tigray, and so on.

The third column, labelled Column B, presents actual allocation of parliamentary seats as recently revised by NEBE and then summarized by the Reporter News Paper.  Incidentally, the Reporter stated that NEBE did not explicitly allocate the share of the Tigray regional state.

However, the reporter listed allocations of seats to all other regions except Tigray, and also stated that the total number of seats remained at 547, as before.  We can then establish that NEBE opted to indirectly report seats allocated to Tigray as 38, the same number of seats Tigray previously had.  We would be left with 38 if we deduct from 547 the total of all seats explicitly allocated by NEBE to Regional States.

Column C provides an interesting insight, deviation of seats actually allocated to the regional states by NEBE from those presented under column A, that is if seats were allocated fairly to regional states according to their resident population shares.

However, the case of Sidama would grossly underestimate the situation, given Sidama has far larger number of resident population than indicated by share of Sidama ethnic population in the total population of Ethiopia.  It is ironic that Sidama’s share is still less than what we would expect, even if we use the share by ethnic group, knowing that this would be underestimation.  Dire Dawa and Afar were among those whose share in parliamentary seats is less than warrantied by their resident population share.

Amhara Regional State gets 10 more seats than its fair share. The SNNPR (less Sidama) is also among the biggest beneficiary from the existing system of parliamentary seat allocation. Tigray, Addis Ababa, and Benishagul-Gumuz are allocated 6, 3, and 3 respectively more than what would have been their allocation if resident population were used to calculate shares in parliamentary seats.

What is the possible source of this anomaly?

Starting from a while back, I have observed and reported possible source of the muddle surrounding Ethiopia’s parliamentary seat allocations.  The hype in discussion about ethnicity matters matter has been so much that the authorities have recklessly got into the habit of using ethnic or language share as a proxy to allocate parliamentary seats.

These figures give a sense of direction as to where exactly the root cause of the confusion.  In any event, it is important this matter is debated to inform NEBE who would need to depart from this misguided parliamentary seat allocation system as soon as possible.

How Much Does it Cost to Print Ethiopia’s New Currency Notes?

This website uses cookies to improve your experience while you navigate through the website. Out of these, the cookies that are categorized as necessary are stored on your browser as they are essential for the working of basic functionalities of the website. We also use third-party cookies that help us analyze and understand how you use this website. These cookies will be stored in your browser only with your consent. You also have the option to opt-out of these cookies. But opting out of some of these cookies may affect your browsing experience.
Necessary Always Enabled

Any cookies that may not be particularly necessary for the website to function and is used specifically to collect user personal data via analytics, ads, other embedded contents are termed as non-necessary cookies. It is mandatory to procure user consent prior to running these cookies on your website.